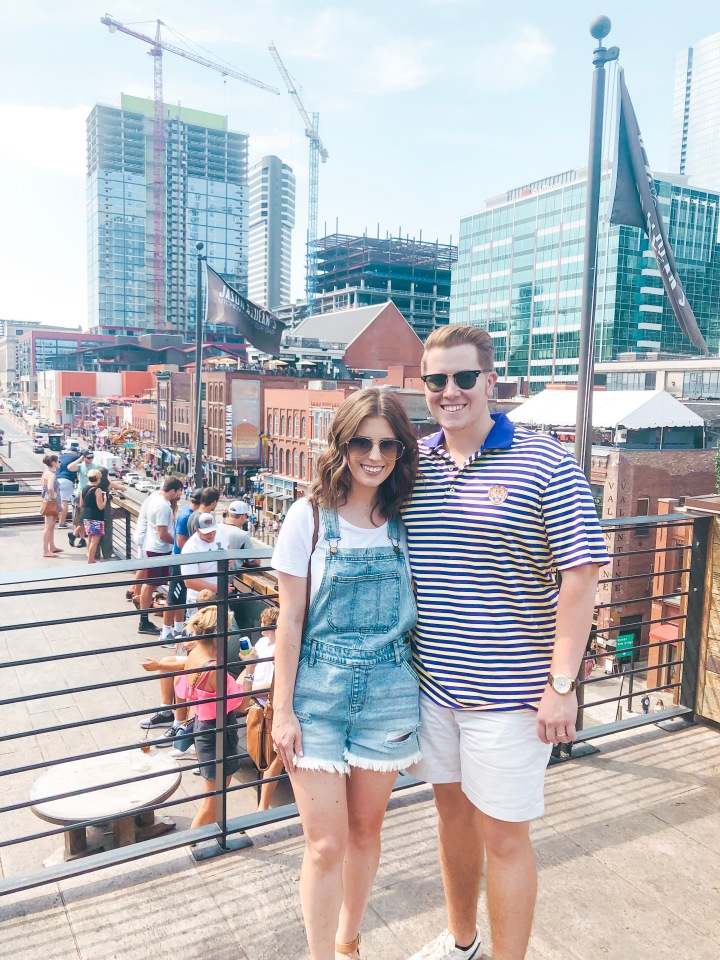 Hi party people! How’s it goin? I feel all over the place LOL! My birthday is less than a week away, and my biggest work event is next week so as you can assume by how late in the day I’m posting this blog post that I am swamped, both physically and mentally! It has been such a busy past couple of days settling back into work after missing 2.5 days – so much to do! BUT, a promise is a promise and I said I would have my Nashville travel guide up on Tuesday, and Tuesday it is! So here we go!

One thing I want to note before jumping in is that the main reason we went to Nashville was for an LSU football game against Vanderbilt. While the game was on Saturday, there was an LSU caravan event on Friday, too. Both of these events took up half our day so we were limited to doing “Nashville” things during our visit there. BUT, we made the most of it and had a blast! I wanted to mention that because there are some things I listed below that we didn’t get to do on this trip, but that we did on our first trip to Nashville two years ago. Overall, I love Nashville, and I’m sharing my top places to eat at and things to do! Enjoy!

Martin’s BBQ Joint | When I think of Nashville, I instantly think of BBQ, and this is the #1 top rated BBQ place in Nashville, for good reason! It’s SO delicious! There are three different locations throughout Nashville for your convenience. And we ate here twice on the trip! We didn’t mean to but by the time we left the game on Saturday, it was 2:30 and hadn’t eaten lunch, and there was a Martin’s across the street that we could walk to and avoid contraflow. But anyway, Ryan and I like to get different things when we’re eating out and then split them, so combined we had the brisket, roasted turkey, “whole hog,” and a rack of ribs. And let me just say, you can’t go wrong with whatever you decide to order. All of it was incredible!

Edley’s Bar-B-Que | We didn’t make it to Edley’s on this trip, BUT we did eat here when we went to Nashville two years ago. It’s another great option if you’re looking to eat BBQ in Nashville, and they have four locations! It was the only BBQ we had on our previous trip, and I remember it living up to the hype!

Hattie B’s Hot Chicken | Nashville is just as famous for hot chicken as they are BBQ, and Hattie B’s is the best! There are six different levels of hotness, ranging from “Southern” (no heat) to “Shut the Cluck Up” (burn notice). And let me just say, I like spicy food, and I stick to “Mild” (touch of heat) when it comes to hot chicken. Ryan gets “Medium” (warming up), and it’s spicy! Make sure to get the banana pudding dessert to cool off your mouth. They have three locations throughout the city.

Pharmacy Burger | This place has got to be the best burger spot in Nashville! It has a delicious variety of burgers, homemade sodas, a German selection of wursts and a gorgeous biergarten. I got the cheeseburger , which wasn’t your typical cheeseburger. It had yellow cheddar, swiss, and muenster cheeses! So cheesy and so yummy! Ryan got the chili burger that had cheddar cheese and sour cream on it. He said he never thought to put sour cream on a burger, and it’s a game changer! If you get fries or tater tots as your side, you’ve got to add a side of beer cheese to dip them in. You’ll thank me later! It’s located across the river but only 10 minutes from Downtown Nashville.

Biscuit Love | Again, another spot we didn’t make it to during our trip, but I highly recommend it! Ryan and I were specifically bummed about this one! As you can imagine they specialize in delicious, homemade biscuits, biscuit sandwiches, as well as other options, and serve breakfast, brunch, and lunch. The biscuits are heavenly, to the point where you will be scrounging for every last crumb on your plate. Located in the very popular and hip area of the Gulch.

Broadway | You may be thinking, “Really, Katelyn? The biggest tourist attraction of Nashville?” Well you know what I think, you are a tourist, and you have to experience the most touristy spot at least once! I personally love Broadway! I don’t care how touristy it is! I could spend all day on Broadway popping in and out of bars, listening to live music and drinking drinks. Two of my favorites: Blake Shelton’s Ole Red’s for its amazing rooftop bar and delicious Ole Red Frosecco drink, and the Florida Georgia Line House for it’s club atmosphere at night!

Country Music Hall Fame | If you love country music you will be in heaven at the Country Music Hall of Fame! But, even if you’re not the biggest fan, you will still enjoy this! There is so much history, memorabilia, and knowledge inside the museum. You can walk around yourself or take guideded and private tours. And the building itself is really cool, too! Located just two blocks off of Broadway!

Parthenon | Located in Centennial Park, the Parthenon is the most interesting site in Nashville. It definitely sticks out! It is a full-scale replica of the original Parthenon in Athens. Crazy, right?! Something you probably aren’t expecting to see in a city like Nashville. It’s cool to see the outside, and the inside even houses Nashville’s art museum!

Vanderbilt University | Even though we visited Vanderbilt’s campus because we were attending a football game, we still would have visited it had we not had the game. I love visiting well-known college campuses across the country. From the architecture to the landscaping, it’s something different and fun to explore while on a trip!

Shopping in The Gulch | There is so much to do in Nashville, including shopping. But if you’re going to do some shopping, you’ve got to do it in The Gulch. The Gulch is Nashville’s premier urban neighborhood known for chic hotels, popular restaurants, and tons of stores, including high-end boutiques. Check out the list of all of the places!

Wall Art | Unfortunately, on this trip we didn’t make it to seeing any of the painted wall murals around town, but we did on our last trip, and it’s so fun! It’s like a scavenger hunt around Nashville! And who doesn’t love a scavenger hunt?! If Taylor Swift’s wings from her “ME!” announcement had still been up, I would have made it a priority to go see them! Haha!